Canada’s Parliament declared China’s actions as genocide back in February.

HERE’S WHAT YOU NEED TO KNOW:

The Chinese government has been accused of persecuting a group of people called Uyghurs because of their religion and ethnicity.

In February, Canada’s Members of Parliament (MPs) voted in favour of declaring China’s actions a genocide.

Watch our explainer to learn what genocide means:

In March, the Canadian government put restrictions — called sanctions — on four Chinese officials that they (and other countries) believe are responsible for the persecution of Uyghurs and other Muslim minorities in China.

The Chinese government says that allegations of abuse are untrue.

But, who are the Uyghurs? What is happening to them?

Who are the Uyghurs?

The Uyghurs are a Turkic Muslim ethnic minority group in China. 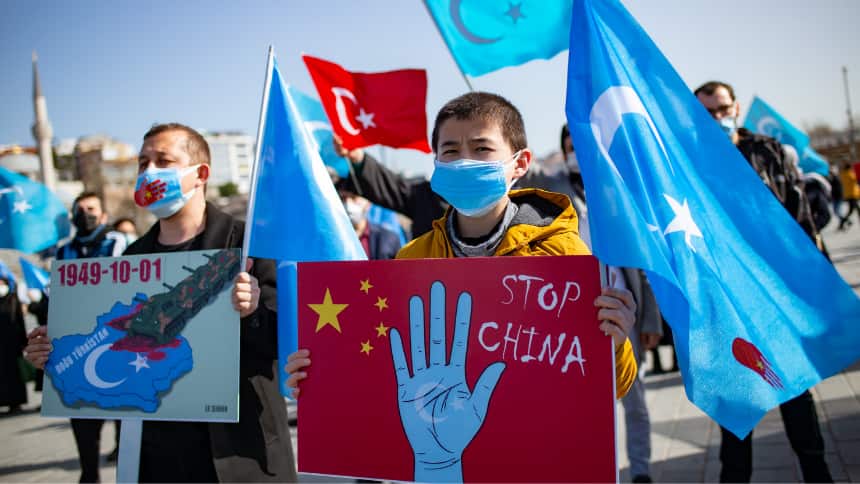 Uyghurs demonstrate in Turkey in February. They were calling on officials to provide information about their families in China. Most Uyghurs who live outside of China live in Turkey. (Image credit: Yasin Akgul/AFP/Getty Images)

Turkic refers to the type of language they speak. Many Uyghurs do not speak Mandarin, the dominant language in China.

Most Uyghurs are Muslim, which means they practise the Islamic religion instead of the most common religion in China: Buddhism.

Uyghurs are a minority group, which means they make up less than one per cent of the population in China.

Other smaller Turkic Muslims groups are also allegedly being persecuted alongside the Uyghurs, including Kazakhs and Uzbeks. 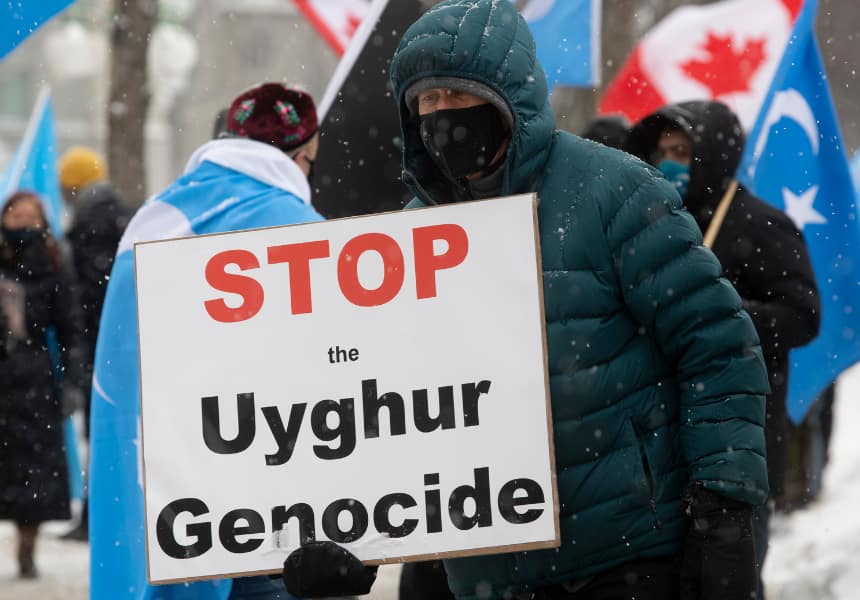 Demonstrators rally at Parliament Hill in Ottawa in February. According to the Uyghur Rights Advocacy Project, there are an estimated 2,000 Uyghurs currently living in Canada. (Image credit: Adrian Wyld/The Canadian Press)

What is happening to Uyghurs in China?

According to Global Affairs Canada, more than 1 million Uyghurs and other Turkic Muslims are being imprisoned in China, not because of crimes but because of their religion and ethnicity.

Multiple reports and eye witness accounts allege that Uyghurs are being held in “re-education centres,” which are described as concentration camps by some activists. 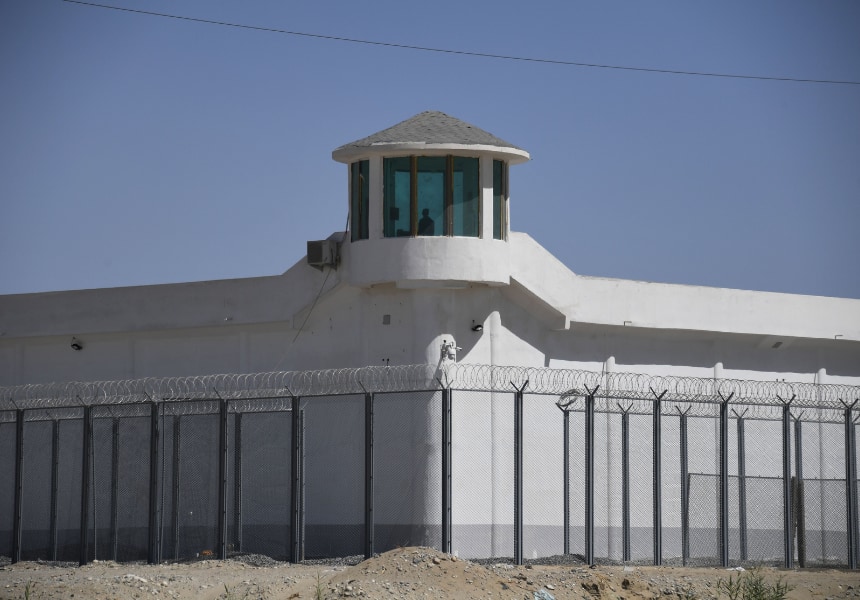 This 2019 photo shows a watchtower at a high-security facility in China, near what is believed to be a ‘re-education’ camp. (Image credit: Greg Baker/AFP/Getty Images)

The Chinese government is also said to be using different methods to prevent Uyghur women from having children, including possible medical procedures such as forced sterilization.

Uyghur children have been removed from their families and also placed in centres, where they’re taught Mandarin instead of their own language and cultural practices. 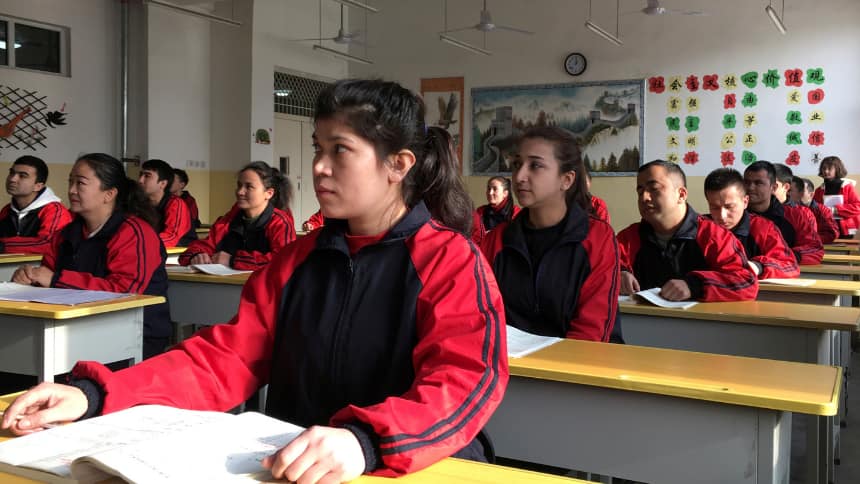 This photo was taken inside of a ‘re-education centre’ in Xinjiang province. The Chinese government oversaw the photo being taken. (Image credit: Ben Blanchard/Reuters)

China has also been accused of forcing Uyghur prisoners to work in factories and pick cotton for little to no pay and under dangerous conditions.

This forced labour, sometimes referred to as slave labour, is allegedly used to make products that are sold all over the world, including Canada. 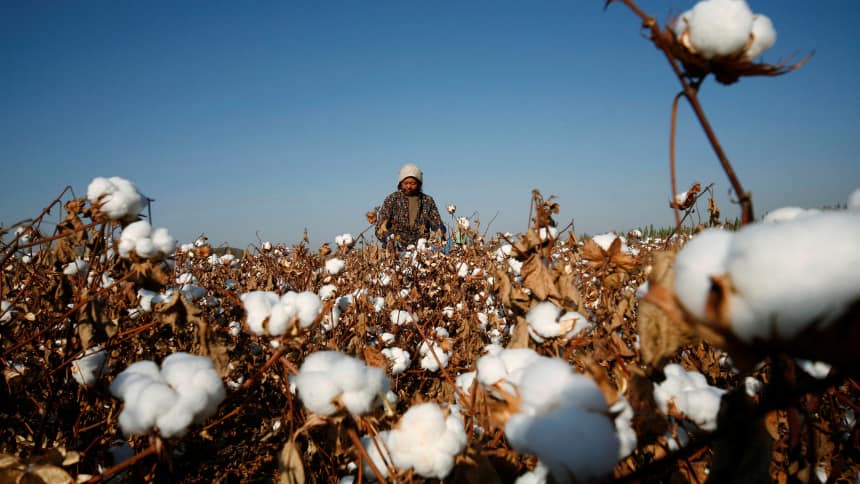 Farms in Xinjiang provide cotton for products made and sold all over the world. Recently, there has been more pressure for companies to stop using cotton from Xinjiang because of fears around forced labour. (Image credit: Stringer/Reuters)

What is China’s position?

The Chinese government says accusations of mistreatment are untrue and it has not violated human rights.

In fact, China’s ambassador to Canada, Cong Peiwu, has said that those who claim Uyghurs are being mistreated in China have created the “lie of the century.”

They say that countries like Canada should not get involved with China’s “internal politics.”

However, in February, elected officials in Canada’s Parliament declared China’s actions against the Uyghurs as genocide.

Members of Canada’s Conservative Party were the ones who proposed the vote on the genocide issue in Parliament’s House of Commons.

Watch this video to find out which genocides Canada’s Parliament has recognized:

Liberal Prime Minister Justin Trudeau and most of his cabinet members — the leaders within his government —  did not attend the vote.

The vote means 266 MPs (out of 338) want the Canadian government to officially declare the situation a genocide.

Still, the government of Canada has not.

“We once again repeat our call for transparency and a credible international investigation in response to allegations of genocide,” he added.