The Chinese Communist Party (CCP) and actors aligned with it appear to be targeting the credibility of Chinese-Canadian federal candidates and Conservative Party leader Erin O’Toole in the fall 2021 federal election.

An article published September 9, 2021 on the CCP-owned tabloid platform, Global Times, questions the credibility of Conservative leader Erin O’Toole and his party’s foreign policy platform on China. The article appears to include a threat – that if Canada elects a Conservative government and that government adopts the policies in the Conservative’s platform, “China will pay back with a strong counter strike and Canada will be the one to suffer.

The Global Times article was published in response to the Conservative Party’s foreign policy platform on China, which includes commitments to:

The NDP’s platform has also committed to “stand up to China” and to work with allies to respond to “China’s disregard of the rule of law.”

In an effort to discredit the Conservative’s platform, the unsigned Global Times article accuses the Conservatives of “hyping the China topic” because they have “very few cards to play, and lack good policies to appeal to voters.”

While foreign media are free to express opinions, such an explicit pro-regime narrative published on a Chinese Communist Party propaganda website represents an obvious effort to influence the Canadian debate and voter intention, while intimidating future elected officials. It is also not the only example of such interference.

At the start of the Canadian election, China’s ambassador to Canada, Cong Peiwu published an article in Canada’s Hill Times in which he accused Canada of “doing evil in the name of the rule of law” in the extradition case of Huawei CFO Meng Wanzhou. Conversely, the Chinese ambassador praised “Canadians with vision [who] have been calling on the Canadian government to end the extradition of Ms. Meng Wanzhou under Canada’s Extradition Act.” The article is clearly intended to influence the foreign policy debate during the election and could sway voters sympathetic to the Chinese Communist Party. 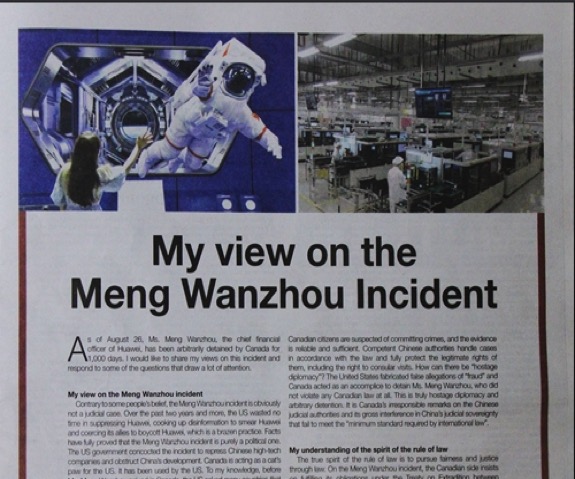 The Chinese diaspora in Canada have also been targeted by Chinese government influence and propaganda. On September 10, 2021, the Chinese Ministry of Foreign Affairs posted a statement on the website of the Chinese Embassy in Ottawa. In it, the ministry criticized Canada’s human rights record and attacked political leaders who, according to Beijing, “carried out unprovoked attacks on China’s human rights and the rule of law during their debates, and grossly interfered in China’s internal affairs.”

Chinese regime aligned actors have also targeted individual election candidates with information warfare and influence operations intended to discredit and undermine voter support for them. In one such case, a British Columbia incumbent NDP MP, Jenny Kwan, may have been the target of pro-Beijing organizations with possible ties to the Chinese Communist Party. Kwan’s support for Hong Kong pro-democracy protests and advocacy for immigration and asylum measures for Hong Kongers is likely seen as problematic for the Chinese government.

As reported in an op-ed in the Vancouver Sun, Fred Kwok invited members of the Chinese community to a free lunch to meet the Liberal candidate Josh Vander Vies who is running against Jenny Kwan. Kwok, who describes himself as an ordinary citizen, is the president of the Chinese Benevolent Association (CBA). The CBA has taken out ads in Chinese and English language media denouncing the 2019 Hong Kong protests,  expressing support for the national security law in Hong Kong, and rebutting claims of genocide in East Turkestan/Xinjiang. Though Kwok is affiliated with organizations that appear to align with the CCP, he has denied any ties to the Chinese government.

In April 2021, BC Conservative MP Kenny Chiu introduced a private members bill to create a Canadian foreign agents registry that would force individuals and groups acting on behalf of a foreign government to register themselves with the federal government. An anonymous article posted on the Chinese version of WeChat, Weixin, on September 8, 2021, accused Chiu of seeking to “suppress the Chinese community” through his private member’s bill. The anonymous article claims that all individuals or groups connected to China may have to register if the bill passes.

However, Chiu’s proposed legislation would only require individuals and organizations whose activities are being directed or controlled by an identified foreign state to register. The article has been reposted on Chinese language websites and could directly impact the election outcome in the riding of Steveston—Richmond East.

Anonymous articles that distort facts to influence voter intention are examples of disinformation and influence operations intended to affect the outcome of our elections.

The Liberal government introduced the Critical Election Incident Public Protocol (CEIPP) to monitor foreign challenges to the integrity to both the 2019 federal election and the 2021 federal election. According to the government, “the Protocol includes provisions for: informing candidates, organizations or election officials if they have been the known target of an attack.” It’s unknown if the CEIPP is investigating any of these instances of foreign interference – there is no contact information published for the CEIPP.

The government also announced ahead of the 2021 election that it had renewed the   Declaration on Election Integrity, which commits the social media companies that have signed it to defending the integrity of the election. However, as of September 14, Twitter continues to allow its platform to facilitate the spread and amplification of the Global Times article.

continues to allow its platform to facilitate the spread and amplification of the Global Times article. 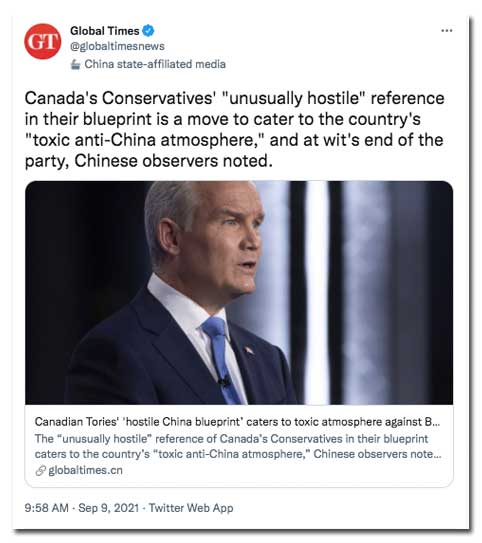