Chinese Ambassador Cong Peiwu says the U.S. has not taken any concrete measures to help Canada in its difficulties with China, while the U.S. State Department says Secretary Antony Blinken has ‘raised several cases’ of arbitrarily detained Canadian citizens.

Amid a narrowing federal election, the Chinese ambassador to Canada says some politicians are putting their own “political interests” ahead of the Canada-China relationship, in an apparent reference to the Conservative Party.

Conservative Leader Erin O’Toole (Durham, Ont.) has been a vocal critic of Beijing and has called for Canada to realign its relationship with China. His party’s 83-page platform has 31 references to China, and calls for shifting Canada’s trade priorities away from the growing superpower, and for Canada to “stand up” to Beijing’s aggression.

While saying that China adheres to the principle of “non-interference in internal affairs” and that he would “not comment or interfere” in the Canadian election, Chinese Ambassador Cong Peiwu added that China “firmly” opposes anyone that is “hyping up issues related to China or smearing China.”

The key issues and people influencing Canadian foreign policy and diplomacy. Weekly.
By entering your email address you consent to receive email from The Hill Times containing news, analysis, updates and offers. You may unsubscribe at any time. See our privacy policy

Asked if that was a reference to the Conservative Party, Mr. Cong said, “Some people put their personal political interests above the interests of the Canadian people as a whole and hype issues related to China.”

“So facts have proved that the stable and healthy China-Canada relationship serves the common interest of the two countries and the two peoples. So I think those people should reflect on the facts and the benefits we … receive from the relationship between our two countries,” he said in an Aug. 25 phone interview.

Conservative Leader Erin O’Toole has pushed for Canada to take a harder line in its relationship with China. The Hill Times photograph by Sam Garcia

The Conservative Party initiated an opposition motion in February that led to the House of Commons recognizing that the Chinese persecution of Uyghurs in the province of Xinjiang is an act of genocide.

Conservative incumbent Michael Chong (Wellington-Halton Hills, Ont.), who served as his party’s foreign affairs critic in the last Parliament, was sanctioned by China in March. Mr. Chong introduced the opposition motion. At the same time, China also sanctioned the House of Commons Subcommittee on International Human Rights, which had previously determined China is committing genocide against the Uyghurs.

The NDP also had a reference to the souring Canada-China relationship in its platform. If it formed government, the platform said the NDP would work with allies to lead a “robust and co-ordinated international response to China’s disregard of the rule of law,” and it would “call out” human rights abuses by Beijing.

The Liberals have yet to release a platform, and neither has the Green Party.

The relationship between Ottawa and Beijing is at its lowest point in more than 50 years of diplomatic relations following the detentions of Canadians Michael Kovrig and Michael Spavor in apparent retaliation to Canada’s arrest of Huawei executive Meng Wanzhou at the behest of the U.S.

Mr. Cong pointed his finger at the U.S. for the current low in relations, saying Canada is a “pawn” being used by Washington.

“The damages to the Canada-China relations are exactly what the U.S. wants to see,” he said. “Canada has paid the abuse for it.”

Since the arrest of Ms. Meng, Mr. Cong said Canada-China relations have lost the support of a “sound political environment.”

Saying that Ms. Meng has been “arbitrarily detained” for 1,000 days as of Aug. 26, Mr. Cong said the United States government’s request for the extradition of Ms. Meng is “purely political” and was “concocted by the U.S.” to hamper Chinese high-tech companies and “obstruct” China’s development.

Mr. Cong said that the U.S. has not done anything in support of the Canadian position aside from making public statements.

“Besides a few statements in support of Canada, has the U.S. taken any concrete measures to help Canada? The answer is not at all,” Mr. Cong said. “And the reason is simple: the U.S. has always committed to America first rather than Canada first.”

Canadian officials have said that the Biden administration is treating the cases of Mr. Kovrig and Mr. Spavor as if they are U.S. citizens.

Mr. Cong said the Canadian government should listen to those who are urging Canada to drop the extradition case.

“Only through an independent decision can Canada solve the outstanding problem,” he said. “We urge the Canadian side out of its interests, the merits of the matter itself, and the fairness and the justice to make the right decision to release Ms. Meng Wanzhou at an early date to allow her safe return to China.”

A U.S. State Department spokesperson said on background that Secretary of State Antony Blinken has “raised several cases of both U.S. and Canadian citizens subject to arbitrary detentions and exit bans in China, and strongly supports the immediate and unconditional release of all those whom the People’s Republic of China has arbitrarily detained.”

The spokesperson said the U.S. condemns the “closed-court” sentencing of Mr. Spavor and was “deeply disappointed” by the Chinese government’s “refusal to grant the requests of foreign diplomats, including Canadian and U.S. representatives, to attend these proceedings.”

“We are also deeply concerned by the ongoing detention of Canadian citizen Michael Kovrig. We stand shoulder-to-shoulder with Canada in calling for the immediate and unconditional release of both Michael Kovrig and Michael Spavor. We continue to condemn the lack of minimum procedural protections during their more than two-and-a-half year arbitrary detention,” the official added. 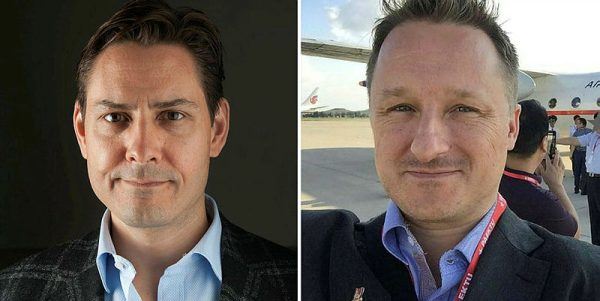 Canadians Michael Kovrig, left, and Michael Spavor have been detained in China for 990 days. Handout photographs

Mr. Cong said since the beginning of the dispute Chinese officials have talked to their American and Canadian counterparts about the need for the U.S. to drop its extradition request, and to ask the Canadian side to release Ms. Meng. He reiterated China’s long-held view that the case isn’t tied to the cases of Mr. Kovrig and Mr. Spavor.

“Those Canadian citizens, their cases in nature [are] totally different than that of Madame Meng,” he said. “Some in Canada have suggested that these cases are related, but rather they are not.”

“But certainly if Madame Meng is released by the Canadian side and her safe return to China, it will certainly create favourable conditions for two countries to move the relationship back on track,” he said.

Mr. Spavor was recently sentenced to 11 years in prison, and ordered to pay a fine, and given a deportation order.

Mr. Cong wouldn’t say whether the deportation would be carried out at any time before the full 11 years is served.

Following news that U.S. President Joe Biden had received a report from the intelligence community on the origins of COVID-19, Mr. Cong said the U.S. has been “persistently hyping up” a lab leak theory.

“It has gone so far as to ask the intelligence community to fabricate a so-called report on origin investigation. The so-called evidence that has been fabricated so far is mostly second-hand evidence that is completely unreliable,” he said.

The report that was recently given to Mr. Biden didn’t provide a “definitive conclusion” about the origins of COVID-19, according to a Wall Street Journal report, which was blamed in part due to the lack of data that was available from China.

“What the U.S. cares about is not facts and truth, but how to smear China,” he said, suggesting it is the U.S. that should be investigated.

China has been pushing the claim that the virus came from the U.S. Army base Fort Detrick in Maryland.

Mr. Cong said China is urging the U.S. to stop shifting blame and to disclose data on early cases and to invite World Health Organization experts to perform contact origins research in the U.S.