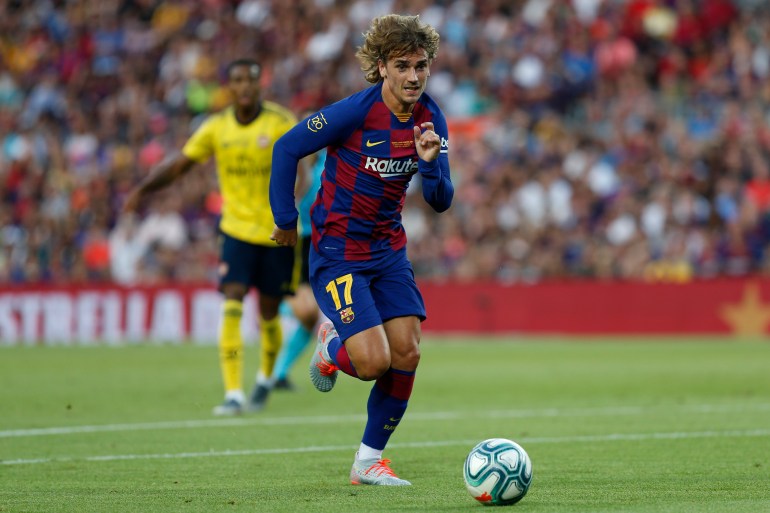 Griezmann, a 29-year-old forward who was one of the leading members of the France team that won the 2018 World Cup in Russia, has been a Huawei brand ambassador since 2017 [File: Joan Monfort/AP Photo]

Barcelona footballer and French national team member Antoine Griezmann has announced he is cutting ties with Chinese technology giant Huawei over the continuing persecution of Uighurs in Xinjiang province.

Griezmann cited reports of Huawei’s involvement in the surveillance of Uighur Muslims as the reason for ending his contract as a brand ambassador with them on Thursday.

“Following strong suspicions that Huawei has contributed to the development of a ‘Uighurs alert’ through the use of facial recognition software, I am immediately ending my partnership with the company,” Griezmann said in an Instagram post.

“I am taking this opportunity to invite Huawei to not just be happy with denying these accusations but to implement action as quickly as possible to condemn this mass persecution and use its influence to contribute to respecting rights of men and women throughout society,” he added.

The United Nations estimates that more than one million Turkic Muslims – most of them ethnic Uighurs – have been detained in camps in the far western province of Xinjiang.

Griezmann’s statement comes after the United States-based surveillance research firm, IPVM, said in a report on Tuesday that Huawei had been involved in testing facial recognition software in China that could send alerts to police when it recognised the faces of Uighur people.

Griezmann, a 29-year-old forward who was one of the leading members of the France team that won the 2018 World Cup in Russia, has been a Huawei brand ambassador since 2017.

“What Griezmann has done is that he has not only spoken but acted as well,” he added.

Chadwick noted that the move was “very significant” since China has been a source of a lucrative business, “not just for individuals athletes, but for European clubs in general”.

Uighur activist Jewher Ilham told Al Jazeera from Washington, DC she had “huge respect” for Griezmann, and others who have spoken in favour of Uighurs, like footballer Mesut Ozil and singer Zara Larsson, people who she said are “willing to choose their conscience over the money”.

“We know how hard of a step this could be. And I’m afraid [Griezmann] may face retaliation for his action,” she said.

Ilham is the daughter of Uighur economist Ilham Tothi who was sentenced to life in prison in 2014 on separatism charges and has been jailed in China.

Activists say the detention camps aim to erase the ethnic and religious identities of Turkic Muslims and ensure their loyalty to the Chinese government.

Beijing denies the accusations, describing camps as vocational training centres to help stamp out “religious extremism” in the troubled province.

People who were in the camps described being subjected to forced political indoctrination, torture and denial of food and medicine, and say they have been prohibited from practising their religion or speaking their language.

Earlier this year, US President Donald Trump signed legislation calling for sanctions on China over the repression of Uighurs.