Uyghur, Chinese (Pinyin) Weiwu’er, also spelled Uygur or Uighur, a Turkic-speaking people of interior Asia. Uyghurs live for the most part in northwestern China, in the Xinjiang Uyghur Autonomous Region; a small number live in the Central Asian republics. There were some 10,000,000 Uyghurs in China and a combined total of at least 300,000 in Uzbekistan, Kazakhstan, and Kyrgyzstan in the early 21st century. 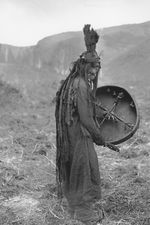 Central Asian arts: Uighurs
The figural arts found new patrons in eastern Turkistan among the Turkic Uighurs, who while living in Tang dynasty China had been influenced…

The Uyghur language is part of the Turkic group of Altaic languages, and the Uyghurs are among the oldest Turkic-speaking peoples of Central Asia. They are mentioned in Chinese records from the 3rd century CE. They first rose to prominence in the 8th century, when they established a kingdom along the Orhon River in what is now north-central Mongolia. In 840 this state was overrun by the Kyrgyz, however, and the Uyghurs migrated southwestward to the area around the Tien (Tian) Shan (“Celestial Mountains”). There the Uyghurs formed another independent kingdom in the Turfan Depression region, but this was overthrown by the expanding Mongols in the 13th century.

The Uyghurs are mainly a sedentary village-dwelling people who live in the network of oases formed in the valleys and lower slopes of the Tien Shan, Pamirs, and related mountain systems. The region is one of the most arid in the world; hence, for centuries they have practiced irrigation to conserve their water supply for agriculture. Their principal food crops are wheat, corn (maize), kaoliang (a form of sorghum), and melons. The chief industrial crop is cotton, which has long been grown in the area. Many Uyghurs are employed in petroleum extraction, mining, and manufacturing in urban centres.

The chief Uyghur cities are Ürümqi, the capital of Xinjiang, and Kashgar (Kashi), an ancient centre of trade on the historic Silk Road near the border between Russia and China. The Uyghurs have lacked political unity in recent centuries, except for a brief period during the 19th century when they were in revolt against Beijing. Their social organization is centred on the village. The Uyghurs of Xinjiang are Sunni Muslims.
Get a Britannica Premium subscription and gain access to exclusive content.Subscribe Now

Large numbers of Han (ethnic Chinese) began moving into Xinjiang after the establishment of the autonomous region in the 1950s. The influx became especially pronounced after 1990, and by the late 20th century the Han constituted two-fifths of Xinjiang’s total population. Over time economic disparities and ethnic tensions grew between the Uyghur and Han populations that eventually resulted in protests and other disturbances. A particularly violent outbreak occurred in July 2009, mainly in Ürümqi, in which it was reported that nearly 200 people (mostly Han) were killed and some 1,700 were injured. Violent incidents increased after that and included attacks by knife-wielding assailants and by suicide bombers. Chinese authorities responded by cracking down on Uyghurs suspected of being dissidents and separatists. The authorities’ actions included shootings, arrests, and long jail sentences until 2017, when the Chinese government initiated a thorough crackdown on Uyghurs in Xinjiang. Citing a need for greater security, the government set up cameras, checkpoints, and constant police patrols in Uyghur-dominated areas. The most controversial governmental undertaking—which was met by protests from human rights organizations—was the indefinite detention of up to one million Uyghurs in “political training centres,” heavily fortified buildings that were likened to the reeducation camps of the Mao Zedong era. In August 2018 the United Nations called upon China to end the detention, but government officials denied the existence of the camps.

The Editors of Encyclopaedia BritannicaThis article was most recently revised and updated by Adam Zeidan, Assistant Editor.

Letter by the Hon. Salma Zahid, the Chair of #CIMM to URAP

Teich and Tohti: China must not hamper visit by UN rights boss to Uyghur region

URAP Calls Immediate release of the Uyghur Report or resignation